Week 6 Story: The Kid and the Frozen Pool

Many years ago, a little boy named Timmy's family got a big, new house, and with it came a big, new pool! Timmy was of the age of peak curiosity, just old enough to know how things work, but not quite old enough to think into his decisions. Moving into their new home in mid November left Timmy sad that he wouldn't be able to use the pool because his parents said it was far too cold. Timmy had other plans, one winter night, he stealthily made his way outside and began to run the hose to the fountain. Unbeknownst to him, pools can and will overflow without the right controls in place, so in leaving the water running overnight, it spilled out everywhere near the pool and forming an icy sheet by morning. Excited to show his parents that it's never too cold to swim, he quickly ran outside and tried to make it to the pool. In his speed, he didn't see that the water was in fact frozen! Slipping onto his butt, his parents looked on in horror at first, but quickly saw he hadn&#…
Post a Comment
Read more 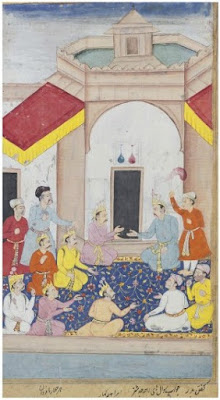 Changing my notes for this week, I want to focus on a few stories that stick out to me so I can break them down in my own stories later.

Bhima and Hidimba: When the Pandavas escaped, they were forced out into the wilderness. Thankfully, they had grown up living in the wilderness already so they were somewhat prepared. In the forest, they encounter Hidimba, a rakshasa. Perfect for them (not), this was one extra hungry rakshasa, and what do they eat? Humans of course. Much like the rakshasa in the Ramayana, this one fell in love with one of our characters, Bhima. The rakshasas brother got irritated at his denial of his sister and his boasting of power. In the fight, Bhima actually drags him away from his sleeping family so he doesn't wake them up with the screams of battle!

The Burning of the Forest: Krishna and Arjuna were having a nice picnic by the forest when a brahmin who turned out to actually be Agni, the god of fire approaches them. He wants to consume the forest in flames, wh…
Post a Comment
Read more 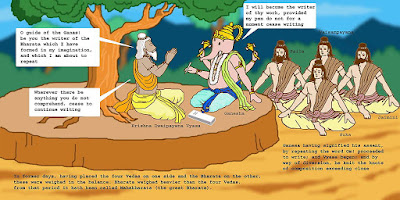 Vyasa, the writer, is also a character! That's interesting. Vyasa originally wrote this to the god Ganesha. Vyasa was able to tell the whole story without stopping, quite a feat.

There are many many many characters in this epic. Again, an important character in this story Devavrata is a human, like Rama, but with the power of not one, but eight gods. He is one of eight children, all the others slain, but now he has all the powers.

Devavrata's father vows that he will give the throne to his new sons instead of him if his new girl bears them. He does and Devavrata is now known as Bhishma.

Instead of winning women like Rama, Bhishma instead won them in battle after defeating many people by himself with one arrow each.

Of the three women he wins, he is only able to marry two, but the third will reincarnate later. She loved another man and was allowed to leave. 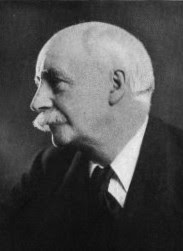 Unlike before, this story start off with the birth of the four sons, not before. Even as a baby Rama already has powers

There is more exposition on Rama meeting Sita in this version. After love at first sight, it takes him time to actually be able to snap the bow to win Sita's hand in marriage.

After a small outrage, Rama is awarded for his success with the bow of Vishnu. Parashurama who awards him is also an avatar of Vishnu.

All four of the sons are married with their father there.

Same as the other version, Rama is forced into exile after Bharata's mother forces Dasharatha to make him king instead of Rama.

Losing Rama was a curse all along, and that helps set Dasharatha's mind at ease in his death.

Bharata comes home to a dead father and is angry at his mother, so he tries and fails to get Rama to return. He places Rama's sandals at the throne for him to return to years down the road.

Whereas before, the main trio seemed much more mobile, in this version, after Rama…
Post a Comment
Read more 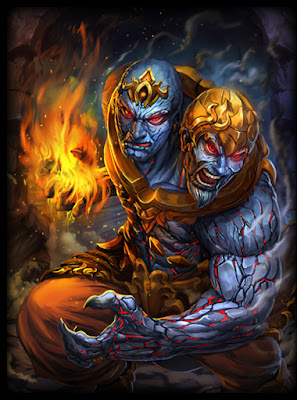 Rama and the others can't jump like Hanuman. Rama uses his celestial weapons to threaten the god of the sea. Nala, a divine artisan is called to make a bridge.

Ravana fakes Rama's death to Sita, but she learns it was fake.

Rama's army is heavily injured, but healed by Garuda. Ravana's brother did not see this coming!

Now we meet Kubhakarna, one of my favorite characters. He must be awoken, but for that he needs food. LOTS of food. Rama still killed him.

Ravana's son Indrajit is still causing problems with his special weaponry. Hanuman takes LITERALLY THE TOP OF A MOUNTAIN back to the army and is able to heal them with the herbs that grow on it.

Now Ravana tries to fool Rama into thinking Sita is dead, but he is told of the rakshasa tricks. He is then informed where Lakshmana will go to battle Indrajit.

Lakshmana kills him, but that just makes Ravana angrier.

Ravana ALMOST kills Lakshmana, but Hanuman again goes to the mountain and is able to heal Lakshmana.

My story ideas are as follows:

Rama returns as King after the pardoning of his Exile so that he never crosses paths with Ravana or the other rakshasas.

Ravana is able to use previously undiscovered rakshasa magic to defeat Rama. This could make canonical sense as Rama does fear rakshasa magic.

Sita, as an avatar of a goddess, falls prey to greed and decides that staying with Ravana, who is immune to even the Gods, will grant her even more power. This eventually leads to both her and Ravana fighting against Rama.

In a final twist, Rama, unwilling to spill any blood where not necessary, forms an alliance with Ravana to create the most powerful group in the world. A happy ending for all, but the most unrealistic. 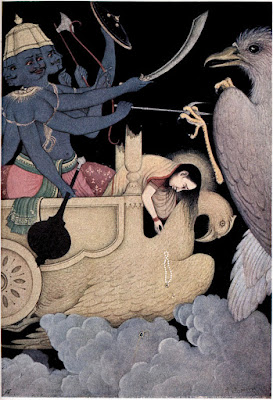 Here is a link to my Storybook!